The product range relating to projectors is becoming increasingly diverse. Gradually, more effective technologies dominate the market, as beside DLP and LCD projectors now LED projectors are highly popular. We will show you what the differences are and what effects the techniques have on a presentation… 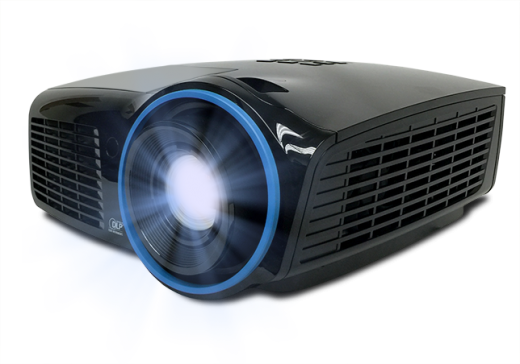 In LCD Technology, already known from flat panel displays, a transparent film of liquid is used in order to display contents. Due to the transparency of the liquid, a light beam can be easily projected onto a wall. For directly above and below the liquid crystal layer there are conductor tracks of transparent material that cross another matrix-like and thus shape a frame grid. The junctions form the light and dark points of light that make up an image. As with a LED projector, devices with LCD technology provide very high quality images clearly legible. LCD devices are small, easy to transport and acquirable at a good price-performance ratio. The disadvantages: Due to the inertia of LCD the images re-drag; the lamps have a relatively short lifetime of about 2,000 hours and are very expensive.

As part of the DLP technology a large number of small, movable mirrors transmit a specific content onto a wall. The imaging takes places by the selective control of the tilting mirrors, whereby the light is guided in the direction of the projection optics. Unlike the LED projector, In DLP technology there are only the states “on” and “off”, so brightness levels are produced by rapid pulsation. The advantages of DLP technology lie in the fast responsiveness of DMP chips, therefore DLP devices are well suited especially for moving pictures. Even nuanced shades of gray can be displayed with a DLP device. lso, no screen burning or re-dragging of the images has to be feared with DLP devices. With respect to these devices, sometimes the loudness of the fan and the color wheel is found to be disadvantageous when operating DLP appliances.

With an LED projector contents can be projected onto a wall using LEDs as light source. A DLP element is imaging in LED projectors, too. However, an LED projector provides several advantages: Besides the low power consumption and the long service life of up to 20,000 hours, the possible battery operation is persuasive. In addition, LEDs generate no heat, so elaborate fans are missing as well as any resultant dust formation or disturbing background noises. An LED projector is compact and lightweight and therefore can be transported easily. The lack of light intensity of LED projectors can be regarded as disadvantageous. A room has to be completely darkened to obtain clear images. In addition, an LED projector is relatively cost intensive in purchase.