In general, a syllabus refers to a set of courses that help students achieve certain academic or vocational objectives. Until now, teachers had to sacrifice hours of tedious work to create a syllabus, as well as to select and create an appropriate representation of the material. To make this work easier on teachers, a Qwizdom software package was developed for use with InFocus displays. 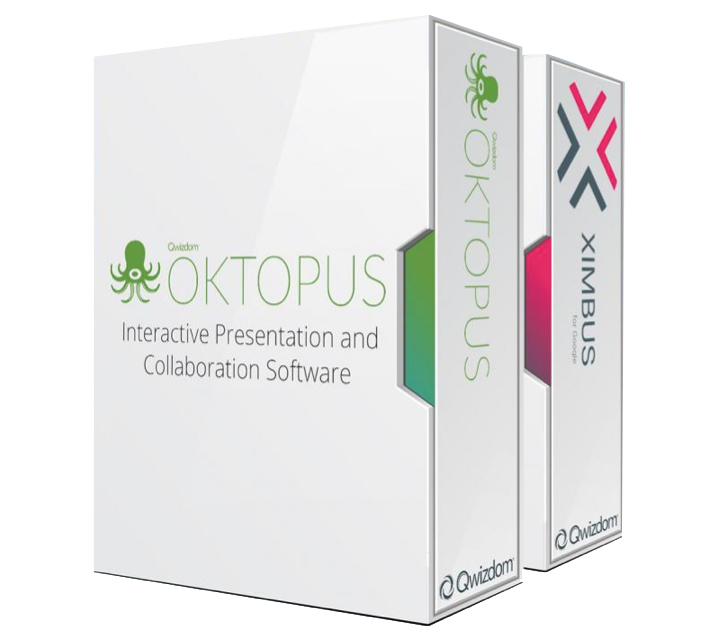 Oktopus is a software for schools looking for solutions with intuitive user-interfaces. This learning aid makes presentations possible in any learning environment by accessing lessons online – on display and on any kind of terminals. The total range of learning materials for students is covered by more than 70 built-in tools for creating syllabi in subjects such as mathematics, reading and writing, geography, and science. Notes are compatible with other applications and browsers facilitate a smooth transfer of documents and plans. Working together on a document or plan becomes much easier and more effective.. This allows teachers to retrieve already existing syllabi online, use them for themselves, improve, and build upon them. Since the software is compatible with Windows, iOS, and ChromeBook, the teacher can use any kind of terminal device.

In addition to tools for maths, geography, and science, Oktopus also features the standard tools which should be contained in each teaching program:

Oktopus Blend is an expansion of the conventional Okctopus software. It extends the one-year license for teachers to up to 40 students who then gain access via LAN. With additional features such as online reports, homework tools, and live lesson participation , students can now learn at home to prepare themselves for lessons.

Ximbus Software is the ideal solution for schools which use Google for Education. The Ximbus web application is fully Cloud-based and has been specially developed for educational tasks via Google Apps. Like Oktopus Blend, there is a one-year license for teachers plus 40 students. Thanks to its integration into Google Drive , it is possible to save and share Ximbus lesson content and to embed Google Contacts. In addition to the Whiteboard function and commenting in classrooms, there is also a function to add documents, browsing, slides, and images from the teacher’s resources and create lesson concepts from Cloud files using Ximbus Timeline. In the video below, you can see an explanation of the many other features of this solution:

With Oktopus, Oktopus Blend and Ximbus you can now upgrade and renew your lessons. Collaboration of the software packages with the Qwizdom software package (INS-QOKTBUN) will help teachers and students today and tomorrow.

No present technology used for video transmission and display will influence the future so definitively as the 4K Digital Canvas. Previous technology allowed for the display of high-definition moving images and photos, but 4K goes far beyond just HD display.

What is Jupiter Canvas?

Jupiter Canvas facilitates the piecing together and management of many visual sources within a company, including video data from fixed cameras, mobile devices, or applications. With Jupiter Canvas, you can display the important and relevant video sources straight to your team for more effective collaboration. Notably, annotation can be added to live video streams.

What is Jupiter Canvas CRS-4K™?

Canvas CRS-4K converts any meeting room or area into a canvas to improve team work or effectively visualise data when needed. It is a small box that can be placed anywhere in the room, and using the Canvas SimpleShare™ feature, each presenter can wirelessly connect their laptop or PC to give their presentation both for local and external canvas participants.

For visualisation, CRS-4K™ supports up to four 1080p HD displays (2/2 video wall) or a 4K system (1 screen). Other features include: Microsoft Lync® integration and support for calls to and from third-party SIP systems to share or transfer video and audio data.

What is the application area of Jupiter Canvas CRS-4K™?

Teams can use Jupiter Canvas CRS-4K to share content of all kinds on smartphones, tablets, and PCs with other teams in real time. Files can be modified, saved, and sent live from several locations. Processing and multiplication in voice and video chats is also supported by the Canvas SimpleShare™ software. 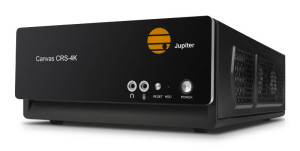 The Canvas CRS- 4K™ system was specially developed for efficient team work and is a must in monitoring traffic, town planning, or production areas as it creates an omnipresent view of the location and complex scenarios.

The SimpleShare technology of Jupiter Canvas provides the ability to wirelessly share videos from any laptop. Remote experts without Canvas can still share video and audio with Canvas users by connecting to any SIP-based video chat. Canvas navigation can also be controlled from any tablet via Multitouch.

Now it’s time for the second part of the “Royal battle”.

In one corner there is the long-established projector, in the other our upstart, the touch screen with integrated whiteboard software or connected Android Whiteboard Box. The previous result is 2: 2 or a draw for projectors and whiteboards in the areas of installation, image size and contrast and quality. You missed the first game? Here you can retrace the battle.

In order to detain you no longer: “Let’s get ready to rumble!”

With digital whiteboards as well as with interactive beamers, professors, teachers or students can write directly onto the picture. In addition, both of them often provide sophisticated software for creating, displaying and storing teaching contributions, such as the Whiteboard software from InFocus. The difference shows when the screen is to be touched in order to select a program. Here, whiteboards work with digital pens as well as with the powerful multi-touch technology which allows you to write on the display with several fingers at the same time. In this regard, the projectors cannot match.

No matter how much you try to avoid, beamers cast shadows when people enter their projection field. And there are only a few things that are more disagreeable during a presentation than to be blinded by the light of the projector or not to be able to see a complete picture due to the shadows. Whiteboards create the image internally by using liquid crystal display panels. Thus, there is no shadowing. In addition, they are independent of light conditions and provide a clear picture even in strong sunlight.

With regard to technology for the education sector, often the price is crucial. Projectors are the undefeated champions on the cost side. For example, a 65-inch JTouch is fast three times as expensive as a Short ThrowBeamer. Depending on the model, the Whiteboard software or Android Whiteboard Box has also to be added in the case of the JTouch. Although a lamp has to be bought and replaced every two years, the projectors remain cheaper. 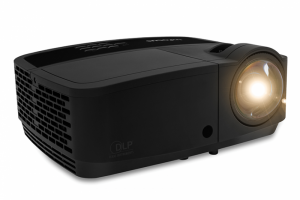 After the judges have scored their points, a clear winner is determined: 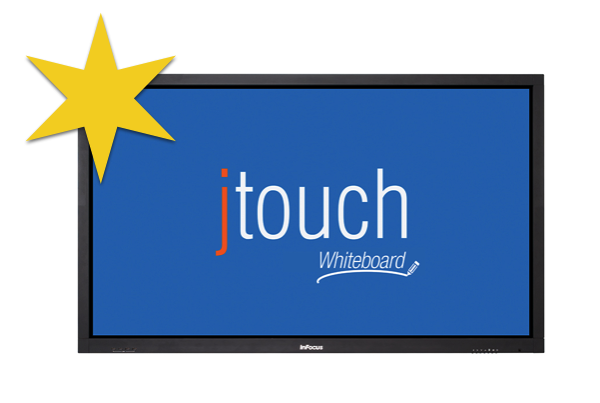 However, the Beamers demand a rematch. The beamer technology is maturing and prices are falling. This point of the beamers might be lost this time. We will see. Notwithstanding the above: the ultimate winners of projection technology are neither whiteboards nor projectors, but teachers and students.

It is a technological “Royal battle”. The struggle between electronic whiteboards and projectors might determine how a whole generation of college students will be taught. Imagine a cage match with five rounds, where advantages and disadvantages compete.

In one corner we have the old champion, the traditional classroom projector

that has always done a good job. It traditionally projects readable texts and pictures onto the canvas. The prices for a projector have never been lower and are currently starting around 300 Euros for a device with scalable projection size and adaption to different light conditions. In other words, it carries the weight of the video based doctrine in classrooms and auditoriums.

In the other corner, we see the upstart: a large interactive whiteboard. It is more expensive, but allows an additional level of interactivity and especially connectivity to the modern media. Equipped with the right whiteboard software and a Android Whiteboard Box, teachers and students have auto forms, pens in every conceivable color, text marker and much more at their disposal. Touch screens never cast a bad light on the lecture or the teacher. Explanation: When using a projector, you usually stand in the light oft the projector. This is most a bit nerve-racking for the speakers. Only in case of larger set-ups / installations the speaker ist standing or sitting far away from the projection screen. Mostly the lecturer stands close to the projection screen an thus fully in the projector light.

There are a lot of preparations to be made before the fight can begin. Both devices have to be installed first. A projector has to hang from a ceiling or wall or to be placed on tables (including sub-tables). This may involve wiring, mounting hardware and oftenly stand -along audio.

Large displays are not easier when it comes to the setup. The InFocus 65-inch JTouch requires two persons to safely hang it up. Likewise, a special hardware installation, often including in-wall wiring, is required as well as the installation of the whiteboard software. But it’s worth it: The InFocus audio systems can easily fill a medium-sized training room with sound.

The bell rings and round 1 begins. Here, the image size matters. In this aspect, the projector that can scale an image to a size of 380 cm (or 3.8 m) is clearly advantageous, especially in large rooms. So, the whiteboards fall back. 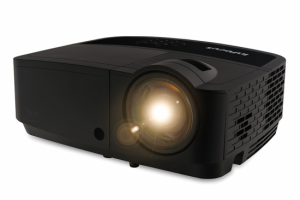 Round 2: Contrast and Quality

The InFocus JTouch 65-inch can show more contrast and image quality than the InFocus projector, providing a clear and sharp image on the entire surface. With the projectors, the shaprness at the edge of the picture can differ slightly from the center of the image. A better contrast brings more detail to the screen, especially at fine shapes of the color in the picture. 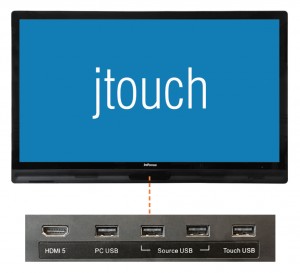 The two parties are now allowed to have a break to prepare for the last 3 rounds. Read next week wich one can expand its leadership!